I recently returned from a short but fabulous vacation to two of my favorite places in Mexico. I had submitted my final manuscript for my second book to my publisher, and it was time to breathe again.

I boarded an overnight bus to Culiacan. Buses here in Mexico are very different from those in Canada. The comfy seats recline, there is extra leg room, a computer terminal at each seat and they even give you a bag of food. I watched a movie, and then fell asleep listening to some beautiful classical music.

Early the next morning, a wave of heat and humidity hit me as I got off the bus. Of course the taxi wasn’t air-conditioned, but the driver had thankfully covered the windows with a blanket while parked at the bus station. Driving with the windows down, a hot breeze was most inviting at the time.

I arrived home after a short ride. And I use the term “home” as this really is home to me. When I taught in Culiacan, Juan and Lucila and their entire extended family literally adopted me. And I always look forward to staying with them when I come back to visit.

Juan had already left for school, and Lucila was getting the kids ready to go. Moments later, we were off to drop the two older ones at Kinder. And then Lucila and I had a delicious breakfast of burritos at a stand by the roadside. And I was delighted that Anjelito kept us company all day, although he did sleep most of the time.

The days in Culiacan flew by all too quickly. It was amazing to see how much the kids have grown in the past months. Jose Augustin was just learning how to walk when I last saw him, and now he was actively racing around everywhere we went. Juan Carlos has grown so tall and has become very talkative. And in the morning, I delighted in their hugs and greetings of “Buenos dias, Abuelita!”

We went out for raspados and went to a park late at night. Juan Carlos raced around on his tricycle and Jose Augustin had a little train. They then played a game of “Lobo” with some other children. On Sunday we went to church where Lucila sang and Juan played keyboard.

We also visited with both Lucila’s family and Juan’s family. There was a stop at the mercado and a lovely drive out to Cascades de San Antonio. And I went to Berlitz one night with Juan and watched him give an oral exam to students studying French.

And I even squeezed in an afternoon with my friend Juan Pablo. We went out for lunch and then went to Las Riberas, a lovely park along the river. It was so peaceful and relaxing.

Culiacan will always have a special place in my heart. Were it not for the soaring temperatures and humidity I would love to move back there. While I prefer the climate in Guadalajara, the air quality is horrible with all the pollution. And while it’s exciting to live in a big city, a smaller city does have it appeal.

I left Culiacan and headed for Mazatlan. The day I arrived it was partially cloudy which was fine for a first day on the beach. And I also went for a walk to Panama, one of my favorite restaurants for lunch. But by evening the rain had started, and Hurricane Vance was fast approaching.

Tuesday the rain continued, so I ventured out to WalMart in a pulminio. I just love these open air taxis, even in the rain! 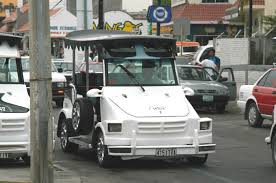 I enjoyed a lovely dinner at the hotel, with only a partial glass wall separating me from the beach. The waves ominously crashed ashore while a guitar duo provided lovely background music in the restaurant.

I awoke the next morning to clearing skies, and excitedly went for a long walk along the malecon. The blazing sun  soon appeared and it was time to hit the beach.

It was surprisingly quiet on the beach with only a smattering of suncots in use. But the vendors were out in full force with jewelry, sunglasses, tattoos, clothing and sombreros. A few musicians strolled the beach as well. And then came the remarkable sunset.

The following morning I spent my last few hours on the beach. The waves were much calmer and the sun burst through the clouds in all its glory.

And before I knew it, the time had come to pack up and check out of the hotel. I haled a pulmonio and headed for the bus station. It was time to return to Guadalajara. My students were expecting me.