About four years ago I discovered a new hobby called photography. When I arrived in Culiacan I bought a Blackberry and discovered how easy it was to take amazing photos without the hassle of adjusting zoom lenses or flashes. I had never had the patience before for perfecting the art of photography with cameras. Now, armed with my Blackberry, I could point and shoot and preserve memories forever.

The above photo was the patio off of my bedroom in my house in Culiacan.

The photo below was taken at Instituto Senda del Rio, where I taught secundaria.

Here is the children’s carousel at Forum, the major shopping mall in Culiacan.

This is an awesome photo I took at the Art Gallery of Sinaloa.

And of course I also enjoyed taking pictures of people. Here is a pic of my Mexican family back in 2011.

I spent many wonderful weekends in Mazatlan. I was fascinated by all the vendors who roamed the beach, selling everything from fruit to jewelry.

I spent two months in Irapuato in the fall of 2011. This was on display at Plaza Cibeles, the main shopping mall. 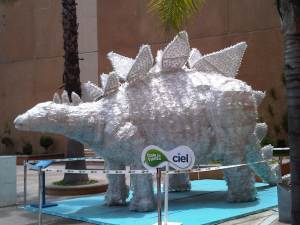 I then moved to Tlaquepaque in October of 2011. My students posed in front of a board in the classroom they decorated for Halloween. And yes, we tie-dyed those shirts in class!

In Centro Guadalajara I encountered this delightful creature on Day of the Dead.

Sunrise over the smog in Guadalajara. This photo was taken on the bridge at Alamo.

These mariachis were performing in the Jardin Hidalgo.

What a spectacular view of the canyon from Mirador!

I retired my Blackberry and got an iPhone during the summer of 2013. And I thought my Blackberry took great pictures………the iPhone is even better!!!

This was the view from my hotel room in Rosarito, Baja California. 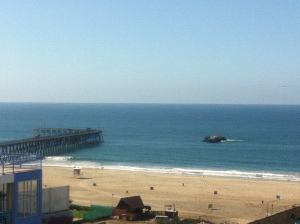 Ramon Carona in Centro Guadalajara is home to carriage rides. 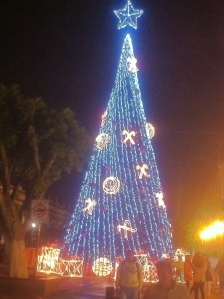 A peaceful scene at Lake Chapala.

Here is a colorful mural from the town of Tequila. 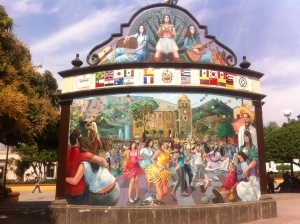 Last month the Virgin of Zapopan parade was held in Tlaquepaque. The priest, followed by throngs of people, marched through the streets strewn with alfalfa to the church.

I was in Tonola last month and this doctor was wandering through the streets offering complimentary blood pressure checks. 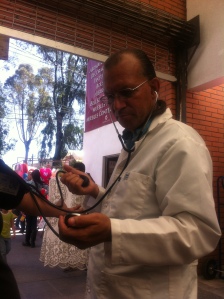 Look at what was parked outside my house one day!

I posed with my students and colleagues at a birthday party yesterday at school.

And I will close with a magnificent shot of the sky at sunset the other night.