In view of what has transpired this week in Guadalajara, I thought it appropriate to relate my experiences in using public transit in this city.

I will begin by stating that I have yet to ride on a bus here that would be deemed roadworthy to travel on the streets in my hometown in Canada. While the executive class buses I use for travel between cities are luxurious with amenities such as WiFi and computer terminals at each seat featuring movies and music, the buses in the city are dilapidated and unsafe.

The other day all the main streets in Centro Guadalajara were closed down due to a huge protest of thousands of people. It would appear that the people here are fed up with the dangers of using public transit. They are demanding changes and improvements. And the government has finally stepped in and is taking action.

Back in December of 2013, an increase of one peso was approved, resulting in a full fare of seven pesos. Students, seniors and handicapped would now pay three and a half pesos instead of three pesos. In return, the buses were to be maintained regularly to ensure safety and the drivers were to have certifications and wear uniforms. A third stipulation was that the safety record required drastic improvement.

Effective March 10th, the fares were rolled back to 6 pesos and three pesos respectively. Why? None of the conditions had been met. People were outraged last week when a bus careened into a crowd of students outside of a university, resulting in the death of a young woman. Cause of the crash was an intoxicated bus driver.

I have found bus drivers here to be reckless and distracted. They talk and text on cell phones while driving. They also smoke while passengers are not allowed to smoke. They race each other down the streets trying to pick up passengers. The drivers own their bus and routes. The more passengers, the more money. People are crammed into these vehicles, often hanging out of the open doors and merely grasping a railing. This is extremely dangerous as the drivers speed through the streets, disregarding traffic lights and constantly weaving in and out of traffic. And they lean on their horns in order to vent their frustration. Crashes are becoming far too common.

The conditions of the buses themselves are deplorable at best. There are often gaping holes in the floor and you can see the road below you. Cracked windshields and broken passenger windows are the norm. Graffiti decorates the interior, along with any religious paraphernalia that the driver may choose. Plush dice and stuffed animals are another favorite. The seats are hard metal and often sway as they are not sturdy. The floor above the wheels of the bus is raised, barely allowing anyone to fit into those seats. The buses lack proper lighting on the outside and it is difficult to discern the number of the route. Scratches, dents, front bumpers smashed and drooping as well as broken side view mirrors are extremely common. And of course the never ending loud noise from the brakes grinding in an attempt to stop the vehicle are constantly heard throughout the streets.

Guadalajara implemented a first class bus system a couple of years ago called Tur. These are blue buses and are available on a very limited number of routes. They cost twelve pesos. The seats are quite comfortable and they are air-conditioned. But again the same problem with poorly maintained vehicles including inadequate lighting and grinding brakes. 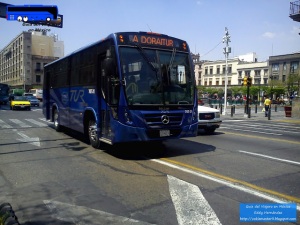 The Macrobus is an above ground rapid transit system that runs along one of the main streets in the city. It has a designated corridor and is a great option. There are two buses—one stops at every station and one is an Express that stops at only a few stations. They run constantly every few minutes from 6 am to 10 pm, the same hours as all the regular buses. There are also feeder buses that go through certain neighborhoods and provide an alternative to walking to a station.

But a dedicated lane does not guarantee safety. Just last week a Macrobus mowed down a cyclist who had strayed into this lane.

Guadalajara also has a subway system. However I have yet to use this form of transportation, so I know very little about it. I have friends who use it and highly recommend it as a fast way to traverse the city.

Having written at length about the woes of public transport in Guadalajara, there are also features that I enjoy and find amusing.

There are very few designated bus stops here. Basically, I stand on a corner and flag down a bus. They usually stop, although some drivers are impatient and want to get the green light and may speed by. Because there are so few marked bus stops, you merely ask a driver to let you out and they stop and let you off. This may be curbside or in the middle of four lanes of traffic. But it’s usually close to where you want to disembark.

There are no schedules and buses come quite often. This eliminates the necessity of checking online. It’s also quite amusing that when there is too much traffic, the drivers will just dipsy-doodle down side streets deviating from the usual route.

Passengers are also entertained by people who get on and play guitars and sing. Sometimes the antics of a clown are amusing. I feel sad when I see young children come onto a bus and sing, especially at night. These entertainers hopefully expect that passengers will throw a peso or two their way.

There are also vendors who board the buses, selling religious articles, potato chips and candy.

One of the aspects I find quite fascinating is how people board the buses. The drivers are always asking everyone to move to the back of the bus. Many people are reluctant to do so. When the bus stops to pick up people, the driver will often open the back door. I find it amazing that you pass your money up to the front through all these people, and your ticket as well as the correct change is always passed back to you.

When it comes to giving change, drivers are only too happy to give you change if you hand then a five hundred peso note for a six peso fare. Actually, I have seen people board the bus only to get change, and then they get off.

The driver has a tray of money in front of him. Quite often he will leave the bus to grab a taco. The money is there, the keys are in the ignition, and no-one would even think of stealing the money or the bus. 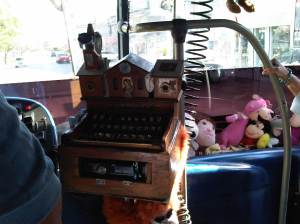 The drivers themselves do not even know the names of many of the streets on their routes. I also question just how literate they are, as they tend to identify their routes by landmarks. And as I’ve said before, street and traffic signs mean nothing to them.

By nature I am a people watcher. People come onto the bus carrying everything from babies to birds. They are dressed in jeans, suits and long gowns. They are students, professionals and laborers. They speak languages other than Spanish. They talk on cell phones, text, play music and watch movies on their phones. People are very friendly and never too tired to say “Buenos dias.”

So despite the craziness and the dangers involved in riding the buses here, they are still my preferred means of transport. I would never consider attempting to drive here. This is a city where lines on the road and traffic signals have no meaning. The lack of rules makes driving here rather precarious. The volume of traffic is nowhere close to being accommodated here by the infrastructure. Drivers here are aggressive and impatient, and I would much rather be on a large bus than in a car or a taxi if a crash should occur.

One of my housemates just returned from Centro and has informed us that once again the streets are blocked off. Another protest? I hope not. Regardless, I will be back on the buses again tomorrow.