A Thursday in July dawned bright and sunny, a rare occurrence here in the rainy season. I flagged down a bus and headed towards Centro Guadalajara. Just past Parque De Revolucion, I arrived at the Museo De Las Artes. 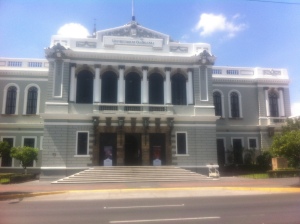 The gallery was rather small as the exhibits were limited to only part of the main floor. However, to my surprise there was no admission charge.

I admired the murals of Orozco on a previous visit to Hospicio Cabanas and I went to the Orozco display first. The mural on the domed ceiling was amazing but very difficult to photograph due to the sunlight streaming in through the window.

There was also another magnificent mural displayed on a wall.

I then ventured into the Permanancia Y Lo Transitorio area. The art on these walls ranged from modern to bizarre to absolutely ugly. In all honesty, I did not find any of them to be impressive. Here are just a few…………. 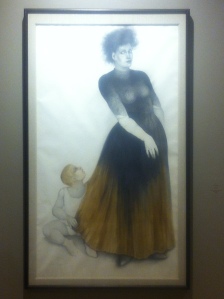 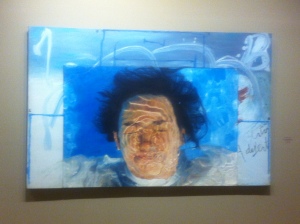 What is your opinion?

Outside once again, I passed through the Rambla Cataluna. This walkway was marked by several tiny fountains.

Alongside of this walkway, a brightly painted mural was a prominent feature on a building. 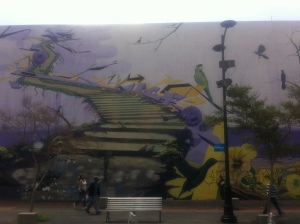 I continued my walk and soon arrived at the Templo Expiatorio. Work on this amazing Gothic church began in 1897 but was not completed until 1972. 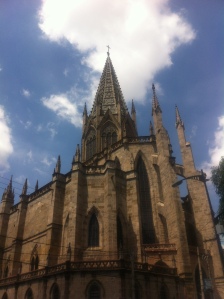 Most impressive are the magnificent pillars, beautiful stained glass windows and ornate statues found inside. 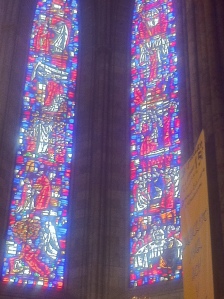 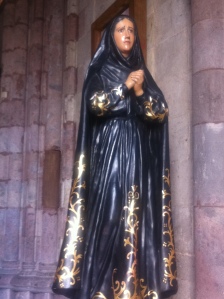 A plaza next to the church had a fountain and  was a lovely respite from the noisy traffic on the other streets bordering the Expiatorio. 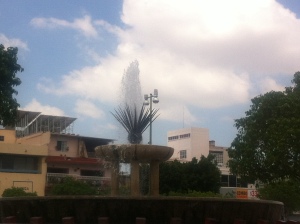 There was also a scattering of vendors selling handcrafted items as well as religious articles.

The low battery warning on my iPhone was now flashing red at me from all the pictures I had taken,  signalling that my exploration was done for the day. Reluctantly I flagged down a Tur bus and headed for home.