“If I had it to do over”………..how often do we utter these words? As the years go by and we reflect on our lives, these words often become a favored topic of conversation among friends. I find that here in Mexico, where we are all so transient and come from such different backgrounds, we often share our life experiences and compare our hopes and dreams that have yet to materialize.

By no means does this means that our hopes and dreams have been shattered. In fact quite the opposite is true. We learn from our past and we can then make more appropriate choices for our future.

I read an article the other day that involved choosing one past regret for each decade and examining how it has impacted your life. My first thought was, “Wow! Only one?”But the more time I spent contemplating my life, the more sense it made. And as I travelled through time, I noticed a trend. These regrets began with the trivial and evolved into the deeper issues that seriously affected my quality of life.

I’ll start with the 50’s. I always hated my short hair, but my mother insisted that it was easier to care for and that I looked cute with short hair. I now look back at pictures of me with short hair and I do see the logic in my mother’s philosophy. Short hair takes far less time to dry and is easier to style. And I did look kind of cute. 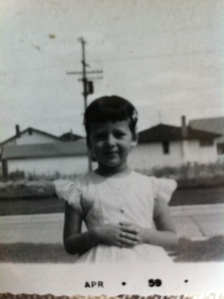 It is now 2014 and I have long hair. It does dry quickly here in Mexico and I usually wear it down so there is a minimum of styling involved.

Back in the 60’s music was my passion. Although I myself played mostly classical music on the piano, I was totally taken by the British invasion of rock and roll. I attended concerts frequently in Winnipeg, enjoying the music of Herman’s Hermits, The Who, The Dave Clark Five and The Hollies. And I saw American groups such as The Beach Boys, Paul Revere and the Raiders and The Monkees as well. Other memorable concerts included Simon & Garfunkel and Sonny & Cher. And I grew up in Winnipeg where Neil Young and The Guess Who were legends. My regret for this decade? I didn’t go to Woodstock when I had the opportunity.

The music from this event has influenced not only my taste in music, but also my lifestyle as well. Today I feel more like the free spirit I was back then, and conformity just isn’t a word in my vocabulary.

In the 70’s, the regret I have involved both my personal life as well as my career choice. I married way too young and opted for an abysmal job in our family business instead of obtaining further education and pursuing a more rewarding career. I have since come to the realization that an undergraduate degree is merely a stepping stone and should not signify the end of a formal education. Over the years I have returned to school and earned other degrees, which have enabled me to become financially independent and able to enjoy the lifestyle I now have in Mexico where I teach English part-time.

Because I am now single again, I am free to make all decisions as to where to live and travel, as well as with whom to associate. I am rediscovering the “Karen” that was buried throughout all those years of marriage. I have recovered my self-confidence and my self-esteem and am truly living life to the fullest now.

I loved the 80’s. I gave birth to two wonderful children and really enjoyed being at home with them. I was fortunate that I had a home office and I worked while my babies napped. I was there to hear their first words, see their first steps and really revel in all the joys of parenthood. We baked together, did a variety of crafts together and went to library and gym programs together. And of course I was the chauffeur for all the extracurricular activities once they started school. My only regret is that I didn’t have a third child. My two pregnancies had been very difficult, and my doctor strongly advised that I be content with two children. After all, I had a boy and a girl. And they are the loves of my life!

The 90’s was a decade of family challenges. There were problems within my own family, as well as issues with extended family members. My one regret is that when my battle with depression and anxiety began shortly after my mother’s death, I didn’t listen to my psychiatrist. He suggested on several occasions that pills were not the answer and that I needed to get out of my marriage instead. Had I listened back then, perhaps many of the issues I have struggled with over the years could have been avoided. But more importantly, my children may have had a happier childhood in a more loving and secure environment.

The first decade of the new millenium brought additional health challenges. I was diagnosed with osteoarthritis in my knees and surgery was indicated. I was reluctant to have this surgery primarily because my mother had died having this surgery. I was terrified at the aspect of knee surgery, and was determined to delay the inevitable as long as possible. I endured constant pain for years. This affected my career as I could no longer meet the physical demands involved  in working with mentally challenged individuals. It greatly limited my physical activities as walking became more and more difficult. Stairs were sheer torture and I finally convinced my husband that it was time to sell the two level house and move into a bungalow.

Recently I have had two successful knee surgeries, and I only wish that I hadn’t waited so long to have them. Before the surgery, walking into a store from a handicapped parking space was a challenge, and stairs were absolutely taboo. Today I walk for miles on uneven pavement here in Mexico and stairs are no longer an issue. And I do not miss that constant nagging physical pain at all.

And now we are well into the second decade of the 21st century. My regrets have gone from a hairstyle to music to education to having children to divorce to health challenges. While I love my new life here in Mexico, I do have one regret, and it’s a big one. I live thousands of miles away from my children, and I am missing out on so much of their lives right now. I miss the days of being a stay-at-home mom where I was with them constantly and lived life through their eyes as well. I guess I still have a few more years in the decade to ponder this one…………